Parish Council Meeting (Only if required)

Planning Committee Meeting (Only if required)

Birstall Parish Council provides your local services. We strive to make Birstall a better place to live, work and play. Our website includes a wealth of information about how we conduct business and what we do. Use the search or browse the site to find whatever you are looking for. If you can't find the information you require then please contact us. 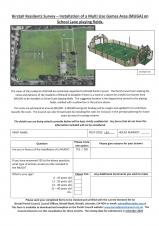 Birstall Parish Council are seeking the views and opinions of residents to establish if there is a need or a desire for the installation of a Multi-Use Games Area (MUGA) on School Lane playing fields.

The survey will run for three months from 1st July 2022 and will be published in the July, August and September 2022 issues of the Birstall Post. A copy can also be downloaded by clicking the link below.

Armed Forces Day celebrations are planned in Loughborough to show appreciation for the armed forces community.

Charnwood Borough Council will be marking Armed Forces Day 2022 on Saturday June 25 with a small event in Loughborough Market Place.

The event will take place between the hours of 10am and 3pm, and as it is a market day, traders and local businesses will be involved. There will also be vintage vehicles on display. More »

Regular contributors from the Loughborough Army Reserve Centre, Royal British Legion and the Land Rover Club will be making a welcome return.

The Mayor of Charnwood, Councillor Jennifer Tillotson Tillotson, will be visiting at 1pm.

Cllr Hilary Fryer, the Council's armed forces champion, said: "Armed Forces Day is a great opportunity to show our appreciation for the armed forces communities who have, and still do make, great sacrifices for each and every one of us.

"Whether deployed on operations or back home in the UK, it is important to show the armed forces and their families that the residents of Charnwood support them and the entire community."

The Mayor of Charnwood, Councillor Jennifer Tillotson, said: "We are incredibly proud of the armed forces community here in Charnwood, and Armed Forces Day is the perfect opportunity to show our deepest gratitude to those who have previously served our country and who continue to do so."

"I look forward to seeing many residents enjoying the activities planned in the market place on Saturday."

Charnwood Borough Council signed the Armed Forces Covenant in 2013 and works in partnership with Melton and Rushcliffe borough councils to help develop and support the Armed Forces community and ensure that military personnel do not face any disadvantage as a result of their service. 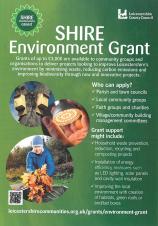 Find out what events have been organised by the parish.

Find out about our vacancies.